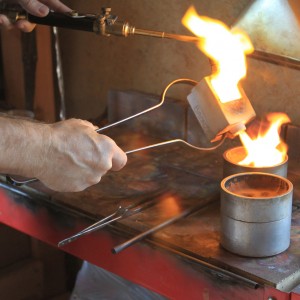 “1984 Art! 1984 Art!” was the battlecry of my metalsmithing professor, Chuck, at University in the College of Design.  This mantra of his as he watched over aspiring artists’ shoulders at their struggling attempts to master such things as the jeweler’s saw on a college student’s budget is no less relevant today than it was then.  I swear the grade he gave me in the fall of that year was because my work that semester had begun to reflect my growing interest in Forensic Metalsmithing and exploring ancient metalsmithing techniques.  Once I discovered how to integrate historical techniques into contemporary design concepts, and new to me if not a unique æsthetic, he happily raised my grade.

Perhaps it is that I am such a loyal soul that those concepts learned in the 80’s have stuck with me into the new millennium in the face of industry standards and trending styles.  Or maybe it is shear laziness or today’s defiant playlist on the studio’s stereo.  Either way, I too, have a few call to arms.  Stomping on the presumptuous concept of “art for art’s sake” for example or “a gradient background is preferred in all photography of artwork being submitted” that so chaps my hide.  To quote a Sage, “great googlie, mooglie.”  Chuck was right, it is not enough to merely create.  Explore, investigate, prototype and create proof of concepts, yes.  But something else is needed – a spark, a breath of life from the depths of that which is you. 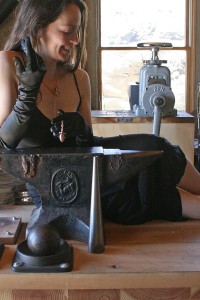 I have found that being an artist seems to also make me a romantic.  And thus, I seem to believe in fundamental truths.  Inherent in our topic of context is the fundamental truth that a metalsmith’s or jeweler’s art is incomplete until it is on the human body.  My work in my chosen medium is not finished until experienced and/or seen in context.  Paintings and sculptures have their preferred forums or context but jewelry as a wearable art form will always lack its final expression until…worn.

The trend that in order to compete as a fine art jewelry must be seen, alone, for its own sake is, quite frankly, bogus.  Art, by its very definition, does not need to be designated as “fine”, “craft” or otherwise.  This need to designate as a way to create hierarchy is the product of small, covetous, controlling and jealous minds.  Too intense?  There is another fundamental truth.  Artists are passionate. 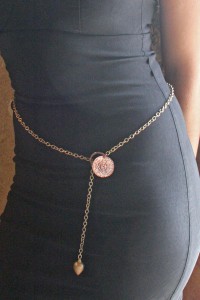 By its very nature, the core of its being, is that the true experience of the patron or person experiencing wearable art is the much more intimate contact between artist and wearer through the artwork itself.  More than visual and tactile, the sensation of the artwork being experienced becomes a synergy of patron, body, artwork and artist.

As an artist our personal expression and Awen takes many forms through varied chosen mediums.  In the medium of metalsmithing or jewelry, the media of recycled copper for example, I choose to take into account the flow, lay and interaction of context.  A necklace which hurts to wear is, unconscionable.  A ring which can’t be worn is not a ring, it is a sculpture.  Jewelry which does not take into account the interplay of its context never achieves its intent or completion.

Additionally, my personal artistic philosophy chooses to see the human form as an artwork itself.  In that, my work becomes a kind of collaboration.  Synergy becomes possible as my work accentuates, as it interacts with rather than covers its stage, its canvas, its context.  Satori.

As artists we need to own it.  Forget trying to fit our work into a trend or type and simply let our work not only fit its context but interact.  Let our work have its voice and watch the synergy of context begin. 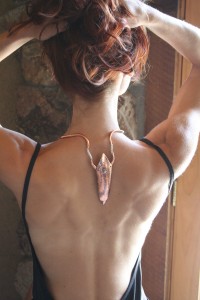